The climate of Mallorca / Majorca 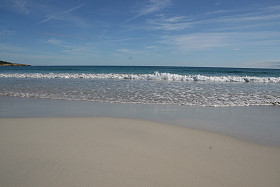 Mallorca enjoys a typical Mediterranean climate of hot, dry summers and relatively mild winters. The island is mountainous and this gives rise to varying climatic conditions according to location, the prevailing winds come from the northwest so southeast regions are generally warmer and drier. Northwest regions and the mountains receive the highest levels of rain. Coastal regions receive around 300 days of sunshine per year. Higher altitudes always experience cooler temperatures with some snow showers from time to time. Summer is hot with low rainfall and plenty of sunshine. Autumn is still pretty mild October is the wettest month in the year, rainfall is concentrated in heavy showers usually connected to spectacular thunderstorms, the sea usually remains warm enough for swimming till mid October. Winter, despite not being very wet, it can certainly be quite chilly, for those who think that Mallorca is Winter beach destination, they are wrong, this is not the Canaries however during the months of January and February each day receives seven hours of sunshine on average so it's not that bad compared to north and central Europe, during late January and February the scenery is blessed with the stunning Almond blossoms covering the island's countryside. Spring, temperatures start to climb and soon a wonderful Summer feeling starts to invade the island and in May it's time for the first dip in the sea of the season.

Visit Mallorca during any time of the year and discover the many faces of our beautiful island, each season offers something special not to be missed.

<- Back to: Other information